Support for Interstellar and App Termination Havocs in Windows

The following new monitors are supported on the IBM Cloud CF platform:

Files are Saved without Additional Extensions

From this release onwards, files are saved with the standard file extensions provided by the user. Netstorm will not append any additional file extensions.

Ability to Customize the Report Duration

You can customize the duration for displaying a report. For example, you can select Last 4 hour, Last 2 hour, or Last week as the duration of your report in the  Account Summary Report window:

Ability to View the Initial VUH

The default VUH units are now updated to display the kVUH unit, as shown highlighted in the following figure: 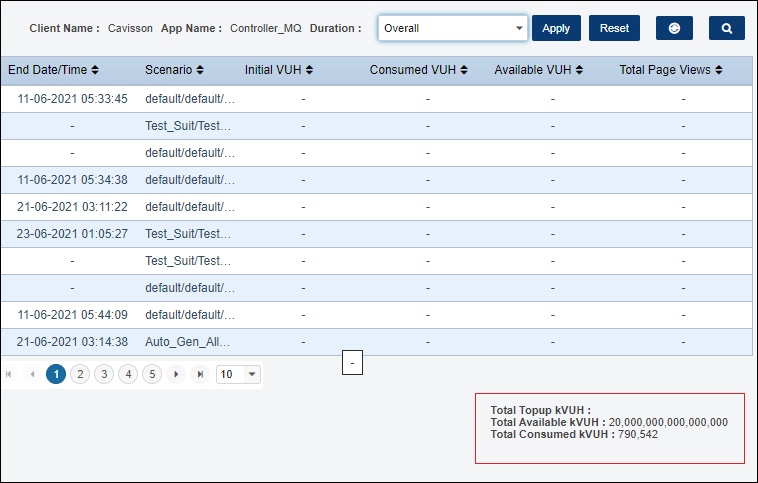 Ability to View the “Total Top Up” Details

Multi-user Workspace in the Script Manager

Support for DEBUG_TEST_SETTINGS in Scenario GUI

Users can now set the DEBUG_TEST_SETTINGS keyword from the Scenario window to define the criteria for a test to qualify as a debug test. The default value of the keyword is as follows:

Added a new option Generator Server Settings in the Advanced Global settings of a scenario. Instead of configuring global generator server settings for all the scenarios, you can now use this option to create a separate profile for each scenario. You can easily set up virtual users per generator, sessions/min per generator, or the required throughput according to the environment.

Git options, such as pull, clone, commit, and history, are now disabled for non-admin users.

From this release onwards, instead of running multiple tests, you can run a single test for Desktop/Mobile/Google Lighthouse/JS Profiling, etc. There is an integration of all the features in a single test. Users can now record a single script with both RBU and Lighthouse instead of creating separate scripts and making multiple groups to execute tests.

Renamed the JS Profiler Tool as Performance Tool in RBU

You can send a request to the Cavisson support team for upgrading any of the following release deliverables: