NetStorm now supports multiple work profiles for each user that can be used for saving data. For example, you can create a new work profile file for saving your scenarios, test suites, test cases, or check profiles in a separate profile.  Each work profile of the user will have its own Git configuration including Git Repository URL, Display name, Email ID, UserName, Password, and other details. Users will have their own workspace, which can have multiple profiles and each profile will have its own set of test assets.

The GIT Configuration window is enhanced to facilitate GIT settings in NetStrom. For GIT configuration in NetStorm, you now need to first select the required work profile and enable GIT settings options. Then, provide your server configuration details, branch information, and author info for connecting remotely to the GIT repository.

Note: GIT version 2.7.4 is supported. GIT version 2.2 is installed by default with Cavbin install or upgrade on Cavisson Server. Cavbin upgrade is required for this feature to work, if the current version of Cavbin is less than 4.6.1. 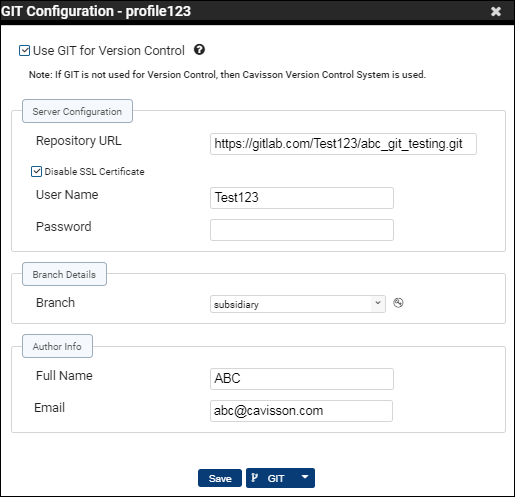 Now, you can record Java-type scripts using the Script Recorder.

Support for SSL in LDAP

This release supports SSL in the LDAP protocol in NetStorm.

Support for TextToHex in Search Parameter

Added the Save All option in the Script Manager

You can now save all the opened files in the Script Manager by using the Save All option.

This release supports the logged-in users to access the SSH Console, a sandboxed view of the Linux terminal, from the  NetStorm, NetCloud, and NetOcean browser. You can launch it by selecting Actions > Launch SSH Console, which opens a terminal window to access your workspace where your test assets are present. You can update the test assets, like scripts, using the VI editor and then commit your changes to your GIT repository.

Note: Cavbin upgrade is required to enable the SSH feature, if the current version of Cavbin is less than 4.6.1.

Using the improved Run JMeter Script window, you can run one or more JMeter scripts in a single test and generate a holistic view of test stats together with server-side monitoring. Select View > Scripts > Run JMeter Scripts to open the enhanced window:

Now, the report link and pdf path is displayed in the output of ts_start_test shell.

Now, users are able to download the script of a testun from the script manager. You can download any script from the previous Test Run and upload that script in the Script Manager.

The following enhancements are done in RBU:

The following Web vitals are added in the RBU metrics graph tree:

Adding a Header While Recording an RBU Script

The option for adding custom script headers in all or specific pages in scripts is now supported in scenario UI and Jenkins UI.

Changes in SSL Settings and Configurations

A new ‘Workspace’ field is added in the hierarchy to support multiple user based workspace. When you delete a user from access control, the workspace is also deleted.

Are you sure you want to delete the user ‘<user name>’?

All test assets, such as scripts, scenarios in the user workspace will also be removed from the system.

Note: The second statement is displayed based on product type (for NS/NC only).

Select the release deliverables that you want to upgrade from the following list and send your request to the Cavisson support team: