In a pre-production and production environment, there are many Linux servers and many processes and services running in each server. These processes are app-based processes doing their tasks.
Many times, there are health issues of the servers due to one or more processes running on server that are using excessive resources which impacts user experience. Most of the time, it is not easy to diagnose the root cause of the issue as issue gets cleared after some time and there is no data available to diagnose the issue.

NetDiagnostics has a comprehensive monitoring, alerting and dashboard capabilities. Using NetDiagnostics, all the metrics of servers and key processes are collected and stored in its big data and retained for several years.

Using this data, NetDiagnostics alerts when any of these metrics are going from normal to warning state based on the thresholds and give early warning before it reaches critical state. Once alert comes, using correlation, one can find which processes are causing the issue.
Using dashboard, one can see system and process health to see the current state and the trend over last N hours or days or weeks.

All services running in Linux servers can be monitored using single configuration.
Following snapshot shows the tree of Service Metrics and Top 5 services by CPU Usage (%):

You can monitor additional processes in addition to services monitored using service monitoring, by specifying a search patterns of all key processes.
Following snapshot shows the tree of Process Metrics and Top 5 processes by CPU Usage (%):

A program loaded into the memory of a Linux computer becomes a process. Processes need to be managed and monitored because they consume system resources like CPU time, memory and disk space. There are also security and safety implications. Monitoring and managing processes is, therefore, an important function of DevOps.

When it comes to process monitoring for Unix systems, you have multiple options using different tools:

The ‘top’ program is a very powerful utility that provides a great deal of information about your running system. This includes data about memory usage, CPU loads, and a list of running processes including the amount of CPU time and memory being utilized by each process. ‘Top’ displays system information in near real-time, updating (by default) every three seconds.

The top command is already pretty readable, but there is a command that makes everything even more readable than that: atop, htop, and glances.

Htop is an advanced Linux process monitoring tool which is similar to “Top” but offers some rich features like interactive process viewer, vertical and horizontal process viewer, shortcut keys, etc. It’s a third-party Linux monitoring tool that doesn’t come pre-installed in Linux or Unix system. You need to download and install it in the system.

With the help of above command, anyone can check who is causing performance issue on your system but how we will get the information in below cases:

• System Overloaded
• Do not have the remote access and machine get down suddenly due to load or any other reason.

For this situation, we want to go back in time to check which process(es) are causing execution issue. Running the top command is not a good option, as it would be very late if server is overloaded already.

With NetDiagnostics monitoring dashboard, one can essentially return in time and see which process was causing the issue.
NetDiagnostics provides functionality to monitor top N services & specified process based on search criteria. In dashboard, we have the feature to show the historical data for a selected period.

In NDE, there are pre-built dashboards and you can create your own. Following is one example showing system and process health:

NetDiagnostics has an in-built support of proactive alerting through which users can get notified whenever a Key Performance Indicator (KPI) metrics like CPU utilization, request per second, average response time etc. breaches the threshold or deviates from baseline data. This allows users to get an early notification of performance degradation even before an actual issue happens.

Alert rule is the key element where user defines the metric and associated threshold to generate an alert for a specific severity such as critical, major, or minor.

Here we configure the rule for CPU Utilization of the NetDiagnostics server. 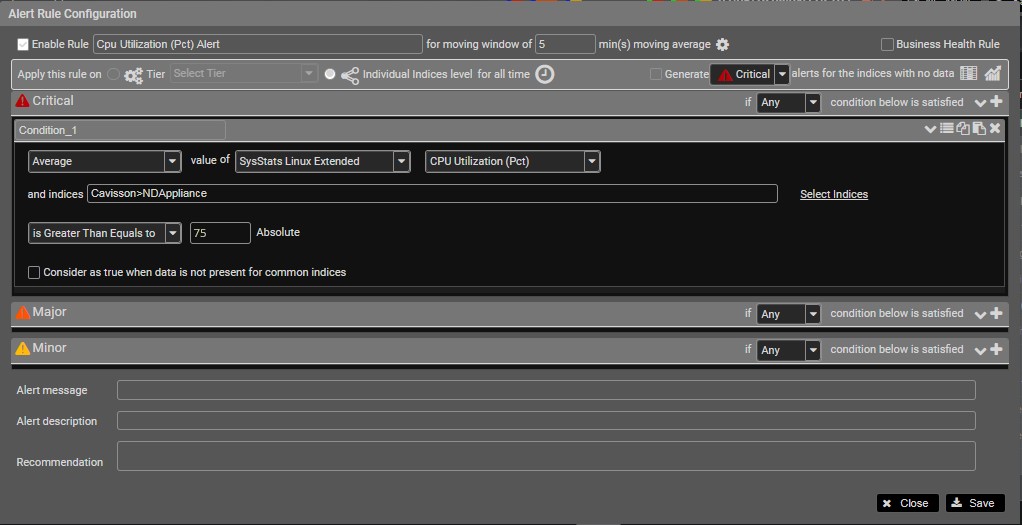 Alert history is useful in obtaining insights into past-generated alerts. Alert history is also used to understand how severity of specific alerts may have changed over a period of time.
Here, we are showing critical alert of CPU Utilization. 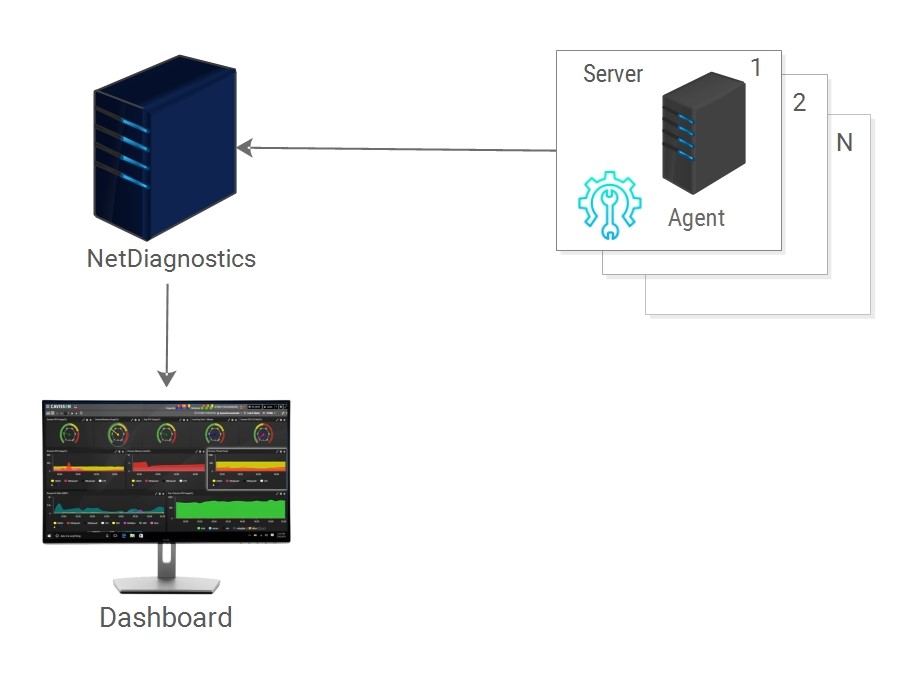 You need to install Cavisson Agent on all servers and it will collect all requested metrics and send to NetDiagnostics Server.